A CD4+ count < 200 cells/μL indicates the need for CTX prophylaxis, principally to prevent Pneumocystis jirovecii pneumonia, although CTX is also active against other opportunistic pathogens, including Toxoplasma gondii, Cystoisospora belli and Nocardia spp. A baseline CD4+ count < 200 cells/μL is also an indication to reflexly perform sCrAg testing. If the CD4+ count > 200 cells/μL at baseline or it increases above this threshold on ART, then CD4+ testing can be stopped, since therapeutic monitoring on ART is best accomplished with VL, not CD4+ count or clinical criteria. However, if virological or clinical failure occurs, then the CD4+ count should be repeated, as CTX prophylaxis should be commenced if the count drops to < 200 cells/μL on ART.

CD4+ counts should be performed:

In patients who start ART with an abnormally low CD4+ count, the CD4+ count typically increases rapidly in the first month of ART, by ~75–100 cells/μL, with a more gradual rise thereafter (50–100 cells/μL per year).56 Most patients achieve a CD4+ count > 500 cells/μL after several years of ART, provided that the VL remains suppressed. However, CD4+ count responses are highly variable and may fail to increase despite virological suppression in about 10–20% of patients.57,58 Such patients have a delayed or absent CD4+ count response to ART despite viral suppression, which is termed an ‘immunological discordant response to ART’, previously, ‘immune non-responders’. Certain studies suggest that older patients are at higher risk of this response. There is no evidence that such patients benefit from a change in ART regimen; therefore, the same regimen should be continued. CTX prophylaxis should be continued if the CD4+ count remains < 200 cells/μL. There is evidence that the prognosis of such patients is worse than in those who have a CD4+ response, but better than that of patients experiencing both virological and immunological failure.58 If patients with an immunological discordant response to ART are clinically unwell, then TB or lymphoma should be considered as the cause of persistent CD4+ lymphopenia. CD4+ counts may remain stable in the presence of incomplete viral suppression in patients receiving ART until the VL is high (approximately ≥ 10 000 copies/mL).59

Figure 2 outlines the suggested approach to patients with low CD4+ counts despite a suppressed VL on ART. 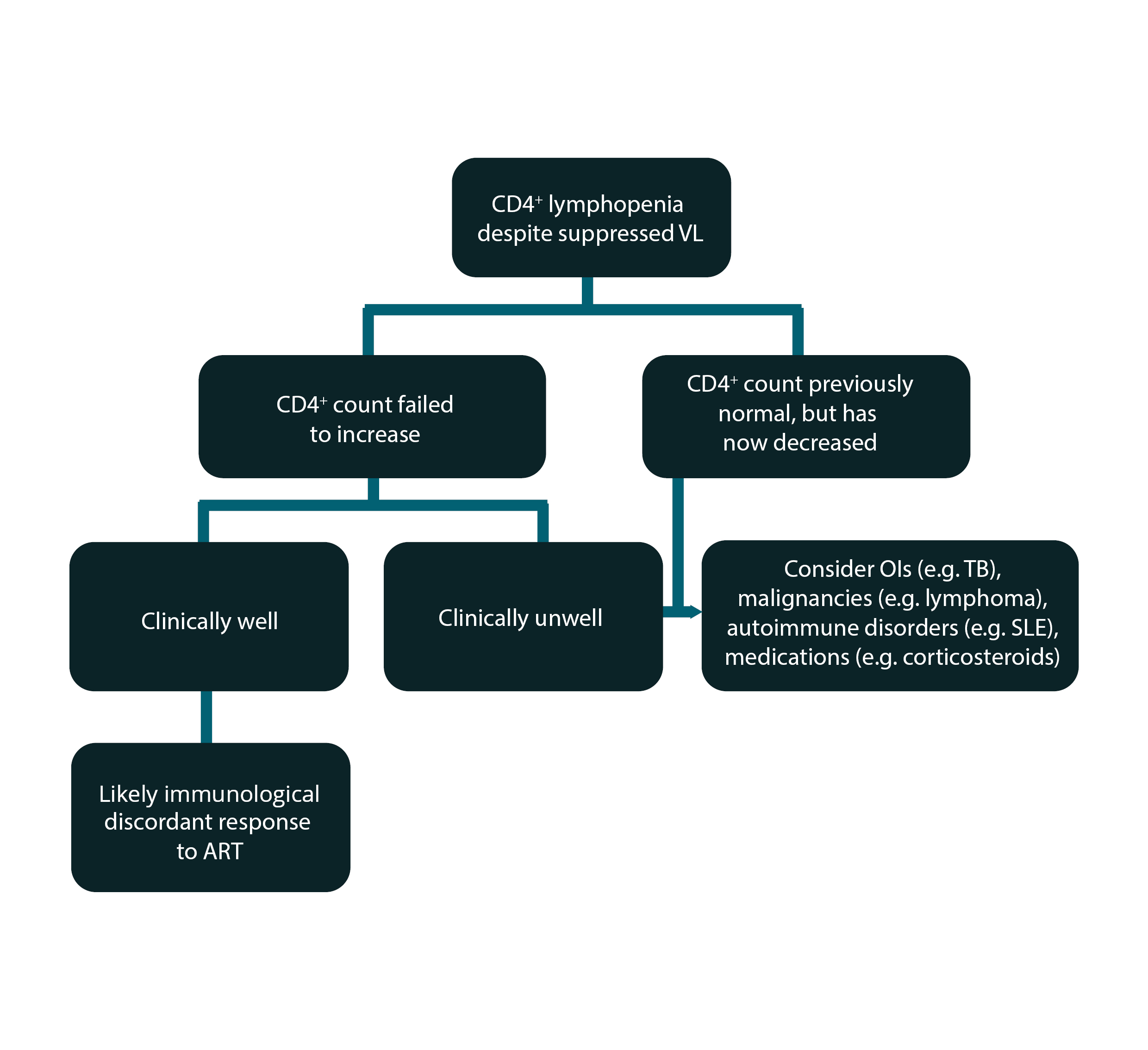