As outlined in the prior module, there should be documented PI or DTG resistance before switching to a third-line regimen. Resistance tests should be interpreted by an expert in conjunction with a full ART history. In many patients failing second-line regimens, there are no PI (or DTG) mutations. In these patients, improved adherence is required rather than switching to a third-line regimen. If side-effects interfere with adherence, then consideration should be given to switching to a more tolerable regimen, provided that this regimen is predicted to be effective based on the treatment history (see Module 13). 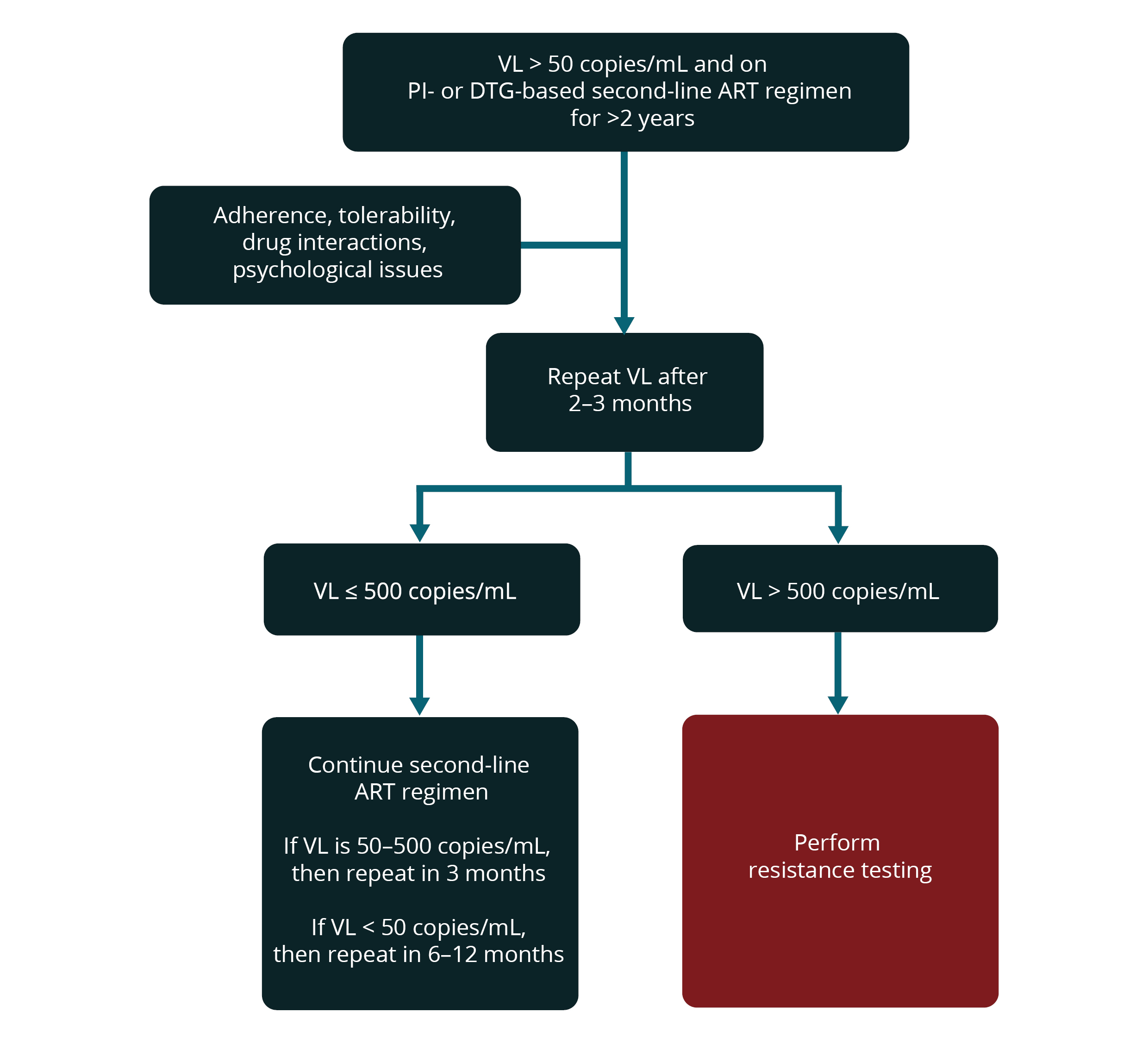 In a patient who has been on a second-line regimen for > 2 years, if there are two or three VL measurements > 50 copies/mL in a 6-month period despite adherence interventions, and adherence is assessed to be satisfactory (e.g. 100% pharmacy claims over 6 months), then a resistance test should be performed (resistance test can only be done if VL > 500 copies/mL). If a patient who has been on second-line therapy for < 2 years is found to have a detectable VL, then a resistance test should not be performed; rather, the same regimen should be continued and adherence counselling and support intensified. The regimen may be switched if there are significant side-effects. It is unlikely that significant resistance to the PI or DTG will have developed within 2 years. The exceptions include: a patient who in error was not prescribed LPV/r double dosing with concurrent RIF use, and subsequently demonstrates a detectable VL; and a patient who has been taking an incorrectly low dose of medication. Such patients should be eligible for resistance testing even if they have been on second-line therapy for < 2 years.

Specific adherence counselling should be provided for patients preparing to start third-line ART, with a clear discussion that this regimen is likely to be their last option for the foreseeable future.

A third-line regimen including a combination of DRV/r and other drugs decided upon based on resistance testing, results in virological suppression in the majority of patients, provided that adherence is optimal.74,75,76,77

For most patients who require third-line therapy (experience virological failure on a second-line LPV/r or ATV/r regimen with a low-, intermediate- or high-level resistance to the PI, i.e. Stanford score > 14), we recommend the third-line regimen outlined in Table 17. However, the final decision will be based on treatment history and resistance test results for the individual patient.

Tip: To best view this table, zoom in or rotate your mobile device into landscape orientation.

The choice of regimen will be guided by resistance test results and should include DRV/r with two NRTIs (generally 3TC or FTC with the NRTI with the lowest Stanford score). In patients failing a second-line DTG regimen who have not failed a PI/r previously, it can be assumed that DRV/r is fully active and can be used at 800 mg/100 mg daily. Based on the results of the EARNEST, SELECT and SECOND LINE trials, it can be concluded that a DRV/r regimen with two NRTIs will be an active regimen even if there is documented resistance to the two NRTIs.60,61,72 However, decisions regarding third-line therapy do need to be individualised in consultation with an expert, taking into account treatment history (which drugs and classes the patient previously failed) and previous and current resistance test results.

RAL may still be active in patients with DTG resistance – it depends on the specific resistance mutations in the integrase gene – but it is usually not necessary to include it in the regimen. ETR and RPV are other drugs that can be considered depending on resistance test results and treatment history.