Viral load (VL) monitoring is key to the success of ART. Decisions to change ART made on the basis of virological failure, rather than on clinical or immunological failure alone, have been shown to result in better patient outcomes.52 If the VL is undetectable, then the virus cannot mutate and develop resistance. A sustained VL < 50 copies/mL is associated with the most durable benefit. A suppressed VL also prevents transmission of HIV to contacts. 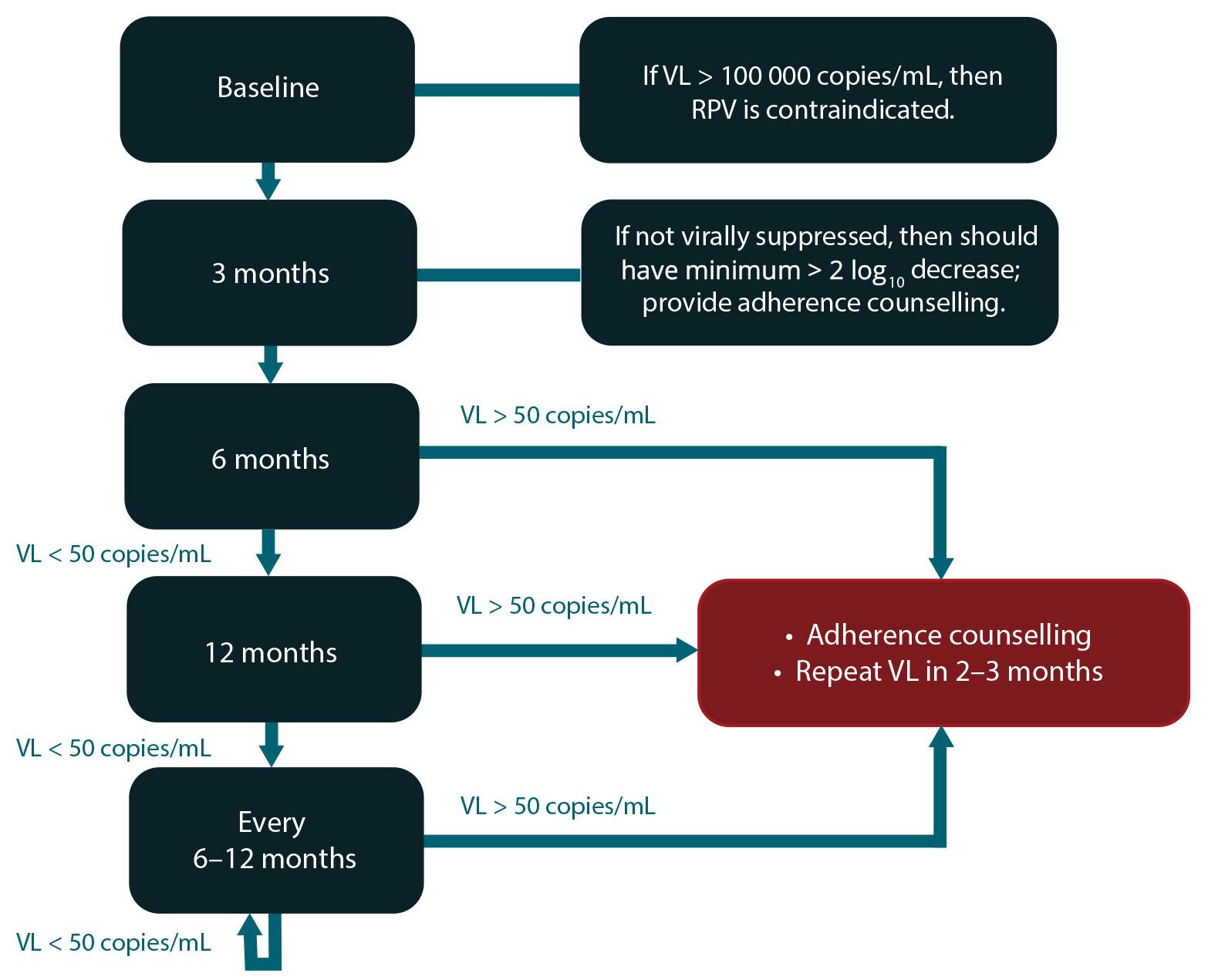 We recommend performing a baseline VL assessment for the following reasons:

A 3-month VL assessment is desirable to detect adherence problems early, before resistance develops. A subset of patients who start ART with a very high VL may not be fully suppressed at 3 months despite 100% adherence, but such patients would have had a > 2 log10 drop in VL from baseline if adherence is optimal and there is no resistance. Therefore, the 3-month result should be interpreted in relation to the baseline VL. All patients who have a detectable VL at 3 months should receive additional adherence interventions. In general, a patient’s VL declines fastest on InSTI-based regimens.

If the 3-month VL is undetectable, then VL monitoring is recommended at 6 months and every 6 months thereafter. In patients who have an undetectable VL for > 12 months, and who demonstrate reliable adherence and follow-up, it may be acceptable to reduce the frequency of VL monitoring to 12-monthly.

If the VL is > 50 copies/mL at any stage, then this should be an indication for urgent action. The patient should receive counselling and interventions should be implemented to improve adherence. A repeat measurement of VL should then be done in 2–3 months.

Treatment success is defined as a decline in VL to < 50 copies/mL within 6 months of commencing ART, and sustained thereafter.

The decision to alter ART should therefore be based on the results of repeat testing after 2–3 months, following intensive adherence counselling. Although previous guidelines used a threshold of 1000 copies/mL to define virological failure, there is now good evidence that a VL > 50 copies/mL is robustly associated with subsequent virological failure, although this has not been established.53,54 Sustained viral replication, even at these low levels, can lead to the accumulation of resistance mutations (although this has not yet been definitively established in the case of DTG).

Isolated detectable HIV VLs < 1000 copies/mL, followed by an undetectable VL, are termed ‘viral blips’ and alone are not a reason to change the ART regimen.

Reasons for a high viral load

A high VL can be attributed to one or more of these three factors:

These explanations are not mutually exclusive. For instance, inadequate patient adherence frequently leads to the development of resistance in patients on a non-DTG-containing regimen.

DTG has proven to be a remarkably robust drug in InSTI-naïve patients when paired with at least one active NRTI. To date, less than five cases of DTG resistance have been described in this scenario. Thus, while a high VL has traditionally been a marker of possible resistance, this paradigm no longer applies for the most part in patients receiving a DTG-based regimen, provided that:

Provided that none of the above are met, a detectable VL should not be assumed to reflect possible resistance. Rather, it can be assumed that the detectable VL, if not fulfilling criteria for a viral blip, merely represents poor adherence, and efforts to address this should be undertaken. We do not recommend performing resistance testing for patients on a DTG-based regimen within 2 years of commencing the drug, provided the above conditions are met.