Such patients should have VL measurements performed 6–12-monthly (see Module 8 and Module 15). Given that DTG is now readily available, clinicians can consider switching patients who are known to have virological suppression (VL < 50 copies/mL within the last 6 months) from EFV (or NVP or RPV) to DTG while maintaining the same two-drug NRTI backbone. If the patient is tolerating the EFV (or RPV or NVP) regimen with no side-effects, then such a switch is optional, as the patient may develop DTG-related side-effects that they were not experiencing on the NNRTI (e.g. insomnia, weight gain). The benefit of such a switch is that a DTG regimen has a more robust resistance profile (DTG boasts a higher barrier to resistance than NNRTIs).12 An additional benefit of switching from NVP to DTG is that it is switching from a twice-daily to once-daily regimen. In patients experiencing EFV-related side-effects (even mild side-effects), we encourage a change to DTG while maintaining the same NRTIs, provided the VL is < 50 copies/mL within the last 6 months. 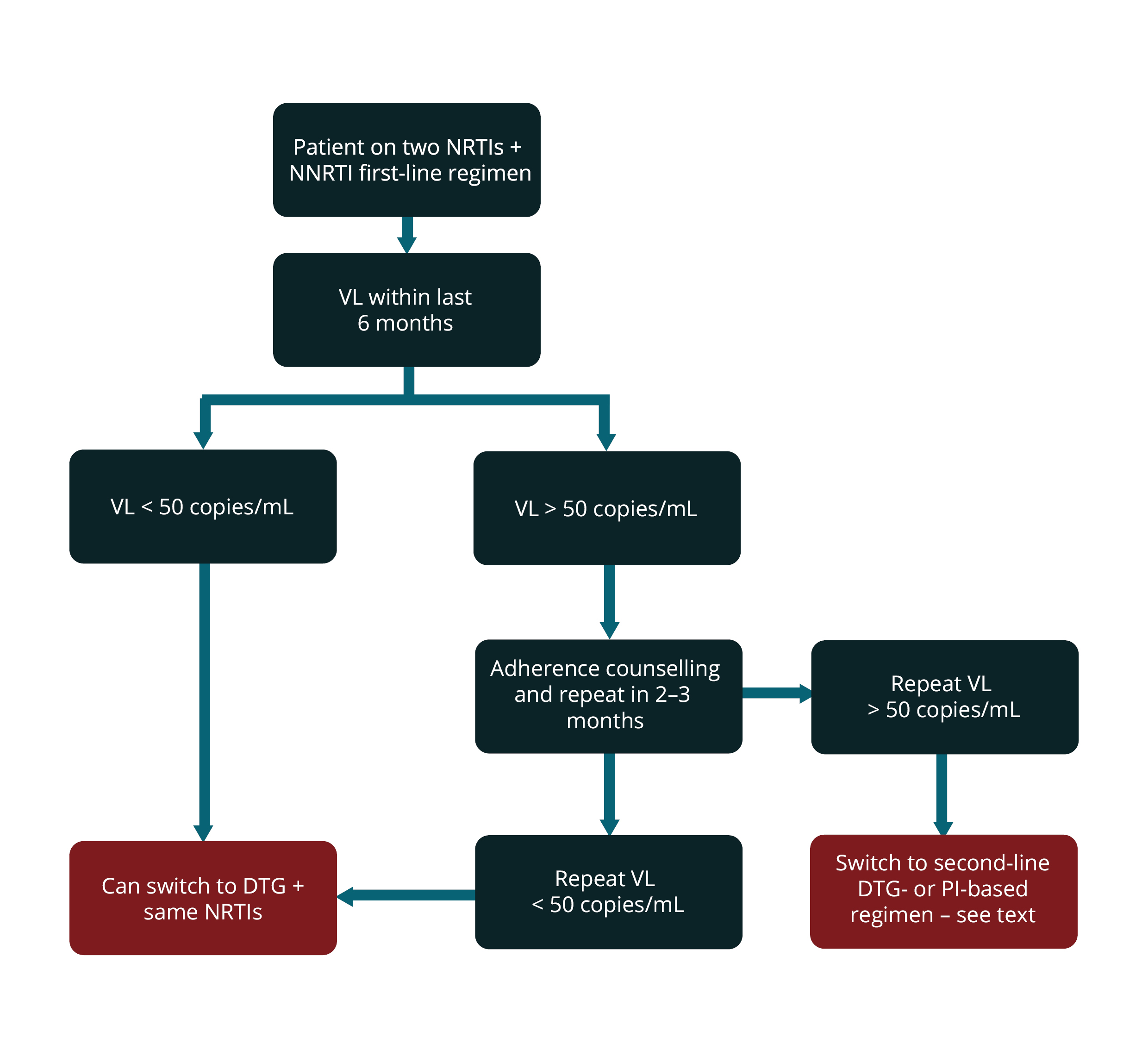 In patients who are not virologically suppressed on an NNRTI-based regimen (VL > 50 copies/mL), we do not suggest an immediate switch to DTG with the same two NRTIs. The reason is that it is possible that such patients have developed resistance to the two NRTIs and may then be placed on DTG without a fully effective drug to accompany it. In this scenario, we recommend enhanced adherence counselling and repeating the VL measurement in 2–3 months. If the VL is then < 50 copies/mL, then the patient can be switched to DTG + the same two NRTIs. If the VL remains > 50 copies/mL, then the patient should be switched to a second-line DTG regimen which includes DTG + two NRTIs as follows:

WOCP should be counselled about the potential risk and benefits of DTG, and allowed to make an informed decision regarding the use of DTG and contraception (see Module 3).

Such patients should have their VL measured 6–12-monthly (see Module 8 and Module 15). We have previously used the criteria of two VL measurements > 1000 copies/mL despite an adherence intervention to define virological failure and the need to switch from first- to second-line ART. This was appropriate for patients on NNRTI-based first-line regimens because of the low barrier to resistance of the NNRTI class. However, considerations are very different with DTG-based first-line regimens. In several clinical trials of DTG in first-line therapy, no DTG resistance has been described despite some patients having virological failure; and in clinical practice very few cases of DTG resistance (< 5 cases worldwide at the time of writing) have been described when the drug has been used as part of a three-drug first-line regimen.63 Therefore, it would be inappropriate to use the same criteria for switching to second-line ART for DTG as it is likely that most patients with two unsuppressed VLs will not have resistance and rather require improved adherence on the same first-line regimen to achieve suppression. For that reason, we only recommend switching from first-line DTG-based ART to second-line if resistance testing demonstrates InSTI resistance.

Until further data are available, in patients with an unsuppressed VL on DTG-based first-line ART, we recommend enhanced adherence counselling. The tolerance of the regimen should also be addressed – the regimen may need to be switched due to side-effects. InSTI-resistance testing should be considered in these situations:

Figure 4 outlines the virological monitoring of patients on DTG-based first-line ART and the recommended response to results. 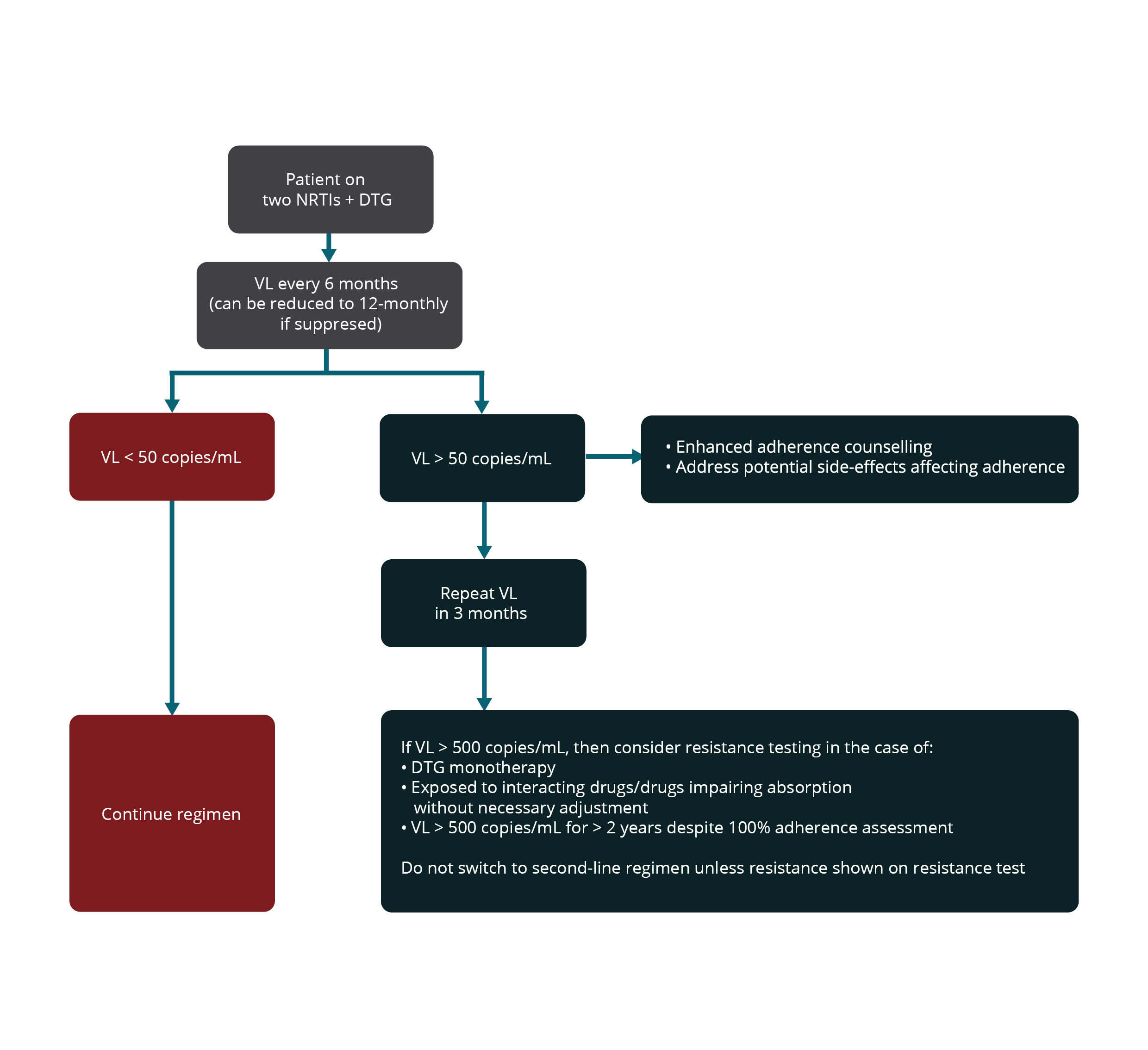